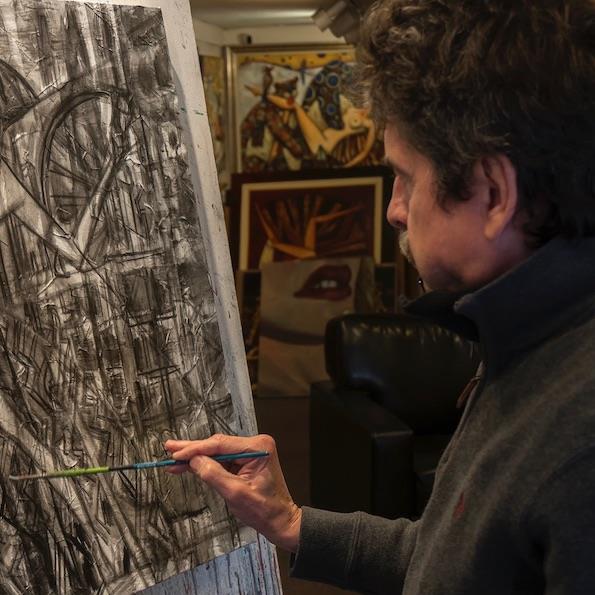 Born in the industrial city of Donetsk in 1961, Andrei Protsouk demonstrated an exceptional gift for art from a young age. With his father a photographer and his mother a master embroiderer, it seemed only natural that he too would pursue a career within the arts. On leaving school Protsouk attended the prestigious Lugansk School of Fine Art, followed by a Masters Degree at the Ilya Repin Leningrad Institute; widely regarded as one of the worlds finest art training programmes. Here, Protsouk studied under Evsey Moiseenko- a world renowned contemporary of Marc Chagall and Pablo Picasso. Moiseenko adopted Protsouk as his protegee, recognizing the potential of his already remarkable talent. Protsouks early works reflected the melancholy of the Soviets living conditions; using heavy textures and dark colours.

In 1994 Protsouk moved with his family to the US, where he quickly established himself as a prominent figure on the contemporary art scene. His paintings became more colourful; his subjects more joyful, celebrating life in the freedom of American society. Many of his artworks now centre around the universal theme of love, frequently depicting couples in the midst of passionate dances or embraces. Unafraid to work to large scales, Protsouks elaborate pieces burst with vibrant colours, intricate shapes and varied textures. His use of constructive line demonstrates his innate creative ability and understanding of the human form, drawing comparisons to the figurative works of Michaelangelo.

Never one to rest on his laurels, the artist works today from a studio within his own gallery in Pennsylvania, continuing to experiment with a range of media and subject matter. His evident passion and dedication to his practice has deserved him phenomenal commercial success, having completed commissions for Johnnie Walker and Coca Cola. His work hangs in private collections of notable figures including George Bush, and as such is considered to have excellent investment potential.